2008 options at Morgan Stanley, Natixis, and Goldman all massively in the money

As the chart below shows, bankers at Morgan Stanley, Natixis and Goldman Sachs are on track to do very well out of options issued in the last bonus round.

With options issued towards the end of the year and typically priced according to the share price at the time, recipients should be able to realize a healthy profit if the price holds up until they can be exercised.

With most options becoming accessible over a three year period, the profitability of 2008 options may yet prove a barrier to pulling people out of these firms.

As things stand, this won't be the case at the likes of Citigroup, RBS, UBS or SocGen, whose share prices have fallen since January and at which options issued for 2008 are likely to be underwater. 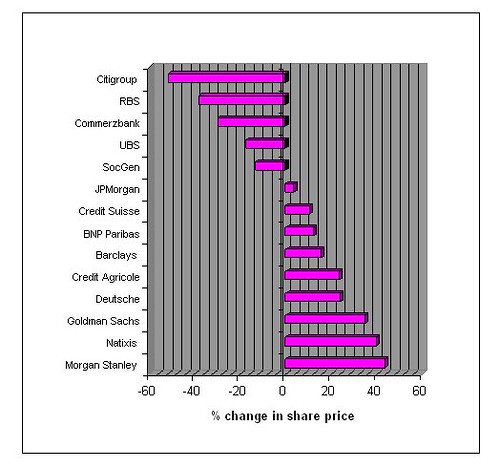