As anyone who reads our musings will be acutely aware, hiring is back, and the scene is set for even more of it in 2010.

However, a graph released this week by Deutsche-Bank strategists suggests current optimism may simply be a byproduct of another unsustainable boom in financial services profits. 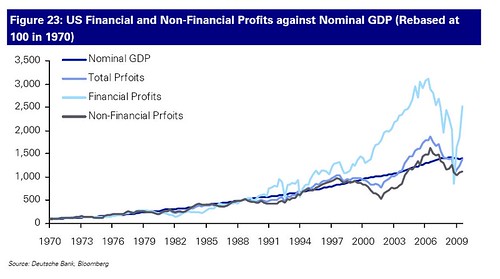 A second graph shows that US financial sector profits now account for 35.1% of the total, higher than at any time since Q3 2005, and, as Deutsche Bank points out, "higher relative to non-financials than at the peak of the excesses in 2007." 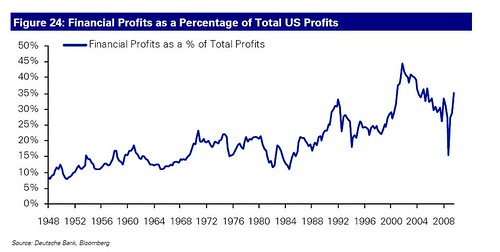 The implication is that recent growth is unsustainable. And past experience suggests that when booms turn to busts, hiring equally quickly turns to firing.

Deutsche strategist Nick Burns says it won't necessarily turn out like this.

"In the long term, growth in financial services profits has to move in line with nominal GDP, but there could be more a leveling off than a crash - it all depends how much and how long the authorities continue to support the financial system," he tells us.

However, Burns admits that it could all end horridly. "If you over-hire, you will have to justify all that hiring with the profits that it creates. If the new hires don't boost profits sufficiently, there could be an issue."

...Unless, of course, something else gives: "It's also a question of whether pay moderates as well," he adds.