While BarCap prepares for cuts, UBS highlights how hugely it's hired

BarCap is said to be readying for more redundancies. Despite having eliminated 500 people already, it appears to have decided that more evisceration is necessary.

Dealbreaker suggests that 5-7% of staff at BarCap are going to be off within the next few weeks.

Officially, BarCap isn't commenting, but senior staff in London confirm that additional cuts are coming soon. Redundancies at the bank appear to be gaining momentum - from declaring plans to cut 'a few hundred' people originally, if the 5-7% figure is right, it now appears to be preparing cuts of 1,250+.

UBS also needs to make cuts, or to pay people less, but for the moment it's doing nothing of the sort. Instead, it's drawing attention to its 'investment in talent.'

At yesterday's investor day presentation, Carsten Kengeter pointed out all the 'selective hiring' that's been happening at UBS.

For those who can't see the table below, this amounts to the addition of:

There has also been hiring in the over-arching area of 'securities,' where headcount is up 21%.

Despite concerns that UBS's investment banking targets seem a little unrealistic and its costs seem a little out of control, Kengeter is clearly pleased with all this hiring. His presentation also included various charts such as those below (click to enlarge) which are intended to highlight how helpful it's been. 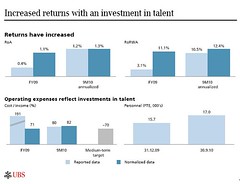 However, Kengeter emphasised too that, medium term, he aspires to a cost income ratio of 70% at UBS's investment bank. Year-to-date in 2010 it's 82%. Last quarter it was 98% when one-off factors were removed from the mix. UBS has been doing a lot of hiring this year; it will be doing rather less in the years to come.