BNP did some big hiring in fixed income in 2010: it recruited 400 people globally in total. It wasn't the only one hoovering up staff. UBS hired 420 FICC people last year. Credit Suisse hired at least 120. And Morgan Stanley hired 400 people across sales and trading in 2009 and kept dribbling in extra headcount as the year progressed.

All in all, therefore, if you wanted a new job in FICC, there were plenty of options on offer last year.

But which option was the right one?

According to JPMorgan analyst Kian Abouhossein, it was BNP Paribas. Halfway through 2011, he says all the others are looking a little overcommitted. They might need to make redundancies.

Compared to the Swiss banks in particular, Abouhossein points out that BNP has low compensation costs per head and strong revenue costs per head (see graph below if it's not firewalled). 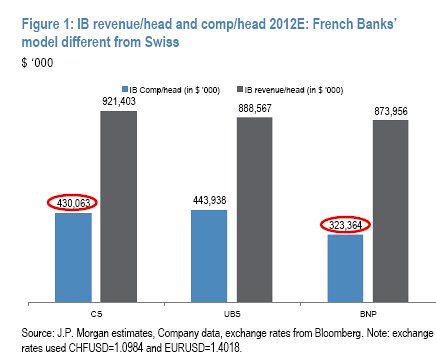 Specifically, he notes that BNP is:

... a good example of a FICC cash business

client focused flow business model, with lower costs/head. BNP should generate 5% lower revenue/head in the IB division compared to CSG in 2012E with -25% lower comp/head on our estimates, reflecting the need for CSG to rethink its FICC strategy in our view.

With FICC revenues expected to decline at a compound annual rate of 3% between 2010 and 2012, Abouhossein predicts that second tier players like UBS, Morgan Stanley and Credit Suisse will be squeezed and may need to indulge in a little cost cutting. BNP won't.

This cost cutting imperative could be most conspicuous over at UBS and Credit Suisse, where Abouhossein points out that rather a lot of compensation costs are now fixed.

At Credit Suisse, for example, Abouhossein estimates that 82% of compensation costs are fixed this year, versus 66% in 2009. At UBS it's more like 65%. Any reduction in FICC revenues or revenue targets in 2011 or 2012 must necessarily therefore be accompanied by a reduction in headcount to maintain margins.

BNP Paribas isn't known as the best of payers in the fixed income market, but if Abouhossein is right and its business is more durable as a result, surely that's a good thing. What would you rather? A job that pays a lot for a small time or a job that pays well for the medium term?