I want a refund: I have passed all three levels of the CFA and I can't get a job

This is what someone said in the comments section last time we wrote about the CFA.

Is this reasonable? And is it reasonable to think you should have a job if you've passed all three levels of the CFA?

What you will know

If you become a CFA charterholder, you will know quite a lot of stuff. As the chart below (visible to all those for whom Flickr isn't firewalled, or on page five here if not) shows, the CFA syllabus covers everything from quant methods and corporate finance to alternative investments. 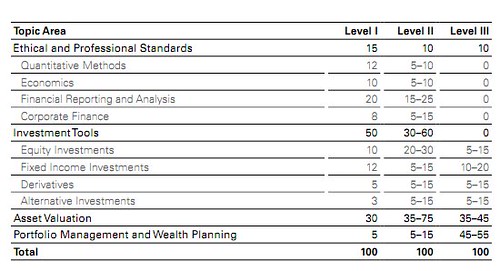 What you will not know

Even though there are now nearly 87,000 CFA charterholders worldwide, achieving the accreditation still conveys a degree of exclusivity. CFA exams are not easy to pass: in 2010 the average pass rate for level I in the summer sitting was 42%; for level II it was 39% and for level III it was 36%. If you can do it, you're probably quite intelligent.

Nevertheless, the mere inscription of 'CF'A after your name won't get you into work.

"Having a CFA means you've got the analytical skills, but it doesn't mean you've got the interpersonal marketing skills," says one headhunter who specialises in placing equity researchers.

"Some banks place more emphasis on it than others," he adds. "US banks like Morgan Stanley and Goldman Sachs tend to be particularly keen on CFA candidates."

Samantha Donald, an asset management headhunter and partner at Shepherd Little, says the real issue is the preponderance of charterholders and the lack of jobs. "There are just a lot more people with all three levels of the CFA now than there were 5 or 10 years ago. It helps, but it's not going to be a pink ticket into work," she proclaims.