Recent reports into the future of the investment banking industry haven't been particularly positive. There was the Morgan Stanley and Oliver Wyman report predicting the need for 20,000 back and middle office job cuts, and now McKinsey has suggested further redundancies may be necessary as investment banks grapple with new regulations.

In a wide-ranging report entitled 'Day of reckoning?', McKinsey has suggested that revenues will tumble, some divisions or entire companies could fall by the way-side and that return on equity in the top 13 global investment banks will shrink from 20% currently to 7% thanks to the impact of Basel III capital requirements.

It doesn't make for encouraging reading.

Not surprisingly, the spectre of further job cuts has been raised: "Especially for businesses with crisis- or regulation-induced declines in volumes and revenues, banks can adjust resources in both front- and back-office functions."

It's also called for a more wide-ranging revision of compensation practices, saying (a little vaguely) that "risk-adjusted compensation sets the right incentives and compensates to some extent for increased capital costs", but concedes that the need to hold on to talent could be a stumbling block.

McKinsey has detailed exactly which areas of the business are likely to be most affected by the new regulation (outlined in the chart below), the assumption being that those divisions with the biggest reductions in revenues would decimate headcount the most. 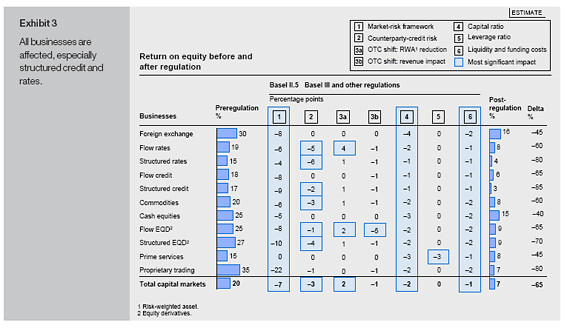 The good and the bad

FICC generally doesn't fair well, which is worrying considering that it accounts for such a large proportion of banks' revenues. Specifically, structured credit and structured rates, which could see RoE fall by up to 85%. Flow rates, flow credit, flow equity derivatives, structured equity derivatives and prop trading businesses will also be hit hard.

Excluding prop trading, the above divisions currently account for around 60% of banks' revenues, which makes McKinsey's projections particularly gloomy.

The high cost income ratios within cash equities, which is up to 90%, could see some smaller firms depart exit this business though, says the report.

If you work in electronic trading, consider yourself fortunate

As banks look towards more operation efficiency, expect more investment in electronic trading. McKinsey is predicting that its use will spread beyond flow businesses like FX and equities and into divisions like commodities and CDS.

"E-trading changes the economics of products by increasing efficiency and price transparency; spreads are narrowed by increased competition. As various businesses shift to e-trading, banks should invest in the appropriate infrastructure," says the report.

The spectre of 'flow monsters' - large universal banks able to exploit their scale and global reach - has been highlighted again as one of the consequences of the Basel III upheaval.

McKinsey says that in order to achieve greater revenue flows: "Banks will continue to invest in technology while expanding their client franchises among top-tier institutional investors, in particular hedge funds and asset managers."