Late Lunchtime Links: Banks' presentations show people stay at Goldman Sachs for years and years, and confirm that hiring is in the emerging markets

Today is the day of the Bank of America Merrill Lynch Financial Services Conference. Goldman Sachs and Morgan Stanley and Bank of America all made presentations. From these, we conclude the following:

1) People stay at Goldman for an average of 5 years and the average tenure is increasing (see below, click to expand). 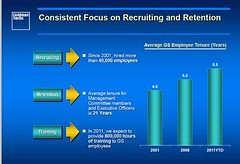 2) That GDP growth has a multiplier effect for banking revenues and this is larger in Asia (for Goldman Sachs), suggesting this is where the hiring will be (see below). 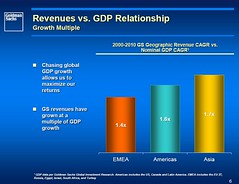 3) That Morgan Stanley has done a lot of hiring in Bric countries and considers Australia and Mexico among its 'strategic geographies.' 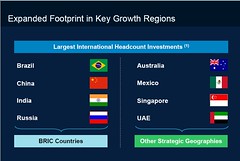 It's ok: Lloyd Blankfein thinks this isn't structural and that growth will 'snap back.' (Bloomberg)

Bank of America has cut its Merrill equity sales team in London and Dubai. (Bloomberg)

Deutsche's new chairman was once an investment banker at Goldman Sachs. (Economist)

M&A is unlikely to pick up next year. (Financial News)

We can have an impenetrable Chinese wall or equity research, not both. (Interloping)

Pay 65 for an evening with Nick Leeson. (Square Mile)