Morning Coffee: Deutsche Bank taking employee mask-wearing to new levels. It's never been harder to cohabit with a banker 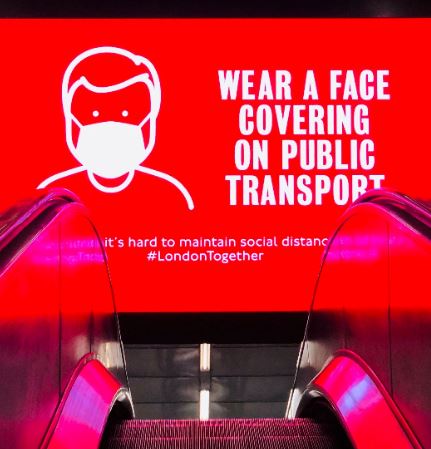 Investment banks have often proven forward thinking when it comes to personal protective equipment (PPE) during this pandemic. Despite only employing 38,000 people, Goldman Sachs turned out to have a stockpile of 600,000 masks available for donation to good causes. Deutsche Bank too turned out to be rich in N95 masks and donated 375,000 of them to the city of Frankfurt in late March 2020.

Like clearing out a wardrobe, passing-on your old masks allows for the purchase of newer ones more attuned to the prevailing fashion. As it becomes increasingly clear that mask wearing might be with us for a long, long time, Deutsche Bank has reportedly procured itself 90,000 new ones. This time, they have been embellished with the bank’s logo.

Finextra reports that all DB staff will receive the new masks with logos, which are both reusable and ‘designed for maximum comfort.’ Some of them are being made by Mey, a German lingerie company (which is selling non-DB branded masks saying things like ‘Ooh la la!’ here). Others are being made by Weitblick a German workwear company, which is also selling its own very functional masks directly at €3.99 for a pack of 10 here.

This could be the start of something. As far as we’re aware, Deutsche is the first bank to provide employees with bank-branded masks, but it’s unlikely to be the last. Most bankers at Deutsche and elsewhere are still working from home, but over time bank masks could yet replace company backpacks and Patagonia vests as the new status symbols in London and on Wall Street. Alternatively, employees may simply list them on eBay, although it's not yet clear whether the DB masks would have any resale value.

Separately, working from home isn't all great if you're in banking. Reuters spoke to London divorce lawyer Ayesha Vardag, who said inquiries from finance sector employees and their spouses rose 170% in the week to May 27. “Suddenly, a high-powered financial professional is stuck all day at home with someone that they usually barely see from week to week and with whom they’ve learned to co-exist at a distance,” said Vardag, adding that some banking spouses have preemptively activated divorce proceedings before jobs are lost, bonuses cut, and divorce settlements are reduced accordingly.

Citi CFO Mark Mason's teenage son encouraged him to speak out on racism. "You’re the CFO of the entire bank...f you put something out, people will read it.” (Wall Street Journal)

Ex-Barclays chairman John MacFarlane says you're more likely to get ahead in a bank that matches your nationality. “I took the view that the probability of my becoming very senior at Citi, being from the UK rather than the US, was not as high as if I worked for a British institution.” (Financial Times)

Egon Durban, the new co-CEO of private equity firm Silver Lake Partners, is a "genuinely down to earth, humble guy" and "smart and charismatic," according to some who've worked with him. Others say he's loud and temperamental. (Business Insider)

HSBC's share price is down more than a third this year. Fund managers don't want to own the stock. “HSBC is fast becoming the hot potato of the banking sector. Every quarter has seen a fresh wave of closures from active global equity managers.” (Financial Times)

Why it helps to wear a wire during pivotal meetings with banks' lawyers. (Roll on Friday).

UBS settled out of court with the employee accusing a manager of sexually assaulting her. (Reuters)

Boston Consulting Group says it already made offers to candidates on H1B visas. It will simply be hiring those candidates in Canada instead. (Financial Times)

What to do when your co-workers make fun of people with less money than them. (Vice)

What to do when relatives ask you for money. (New York Times)

Vanity discourages men from wearing masks. More men than women agree that wearing a mask is “shameful, not cool, a sign of weakness, and a stigma.” (WSJ)

Photo by Étienne Godiard on Unsplash