Where to escape the high taxes

Now that New Labour is no longer "intensely relaxed about people getting filthy rich", you may feel the urge to go elsewhere.

The chart below, compiled by Ernst & Young for UK tax rates of 40%, shows that the Czech Republic, the Slovak Republic and Mexico have some of the lowest rates of marginal income tax for high earners globally. Unfortunately, none are famed as financial services centres.

More appealing for financiers, according to Alex Henderson at PriceWaterhouseCoopers (quoted in The Times), are Ireland and Switzerland.

However, Ireland and Switzerland are less appealing than they were.

Like the UK, the Irish government is also raising taxes on high earners. Even before it did this, it already deducted 42% of anything above €36,400 (32k) even before the new increases.

Meanwhile, Switzerland has recently moved to crack down on the 'Pauschalbesteuerung' system enjoyed by wealthy foreigners, which enabled them to pay tax only on five times the rental value of their home. In future, foreign residents of Switzerland will be taxed like the Swiss - according to their wealth and income.

Conspicuously absent from the chart above is Dubai, where income tax is zero and looks likely to stay that way. Also absent are Singapore and Hong Kong where the highest rates of income tax are 20% and 16% respectively.

Separately, the chart below from The Times shows the extent to which yesterday's budget hits only the well off, and in particular families with a single high earner (which we suspect may apply disproportionately to bankers and spouses). 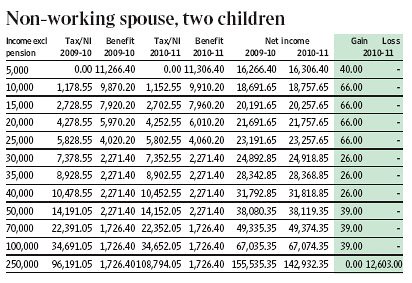