Cash bonuses last year may have been depressingly small, but as we pointed out in April, the recovery in banks' share prices means that any options issued around December are now looking very lucrative indeed.

Share prices have continued to rebound, making 2008 options even more appealing today than they were two months ago: as the Bloomberg chart below shows, the stock of Goldman, Morgan Stanley and JPMorgan is now close to trading at pre-Lehman levels. 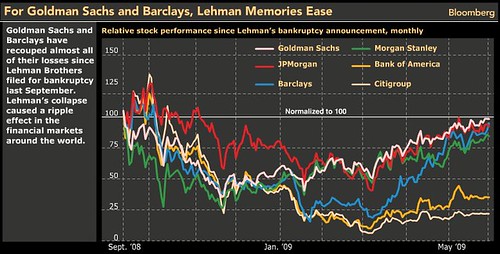 The most exciting stock price recovery has, however, been at Macquarie, whose stock more than doubled over March and April. Unfortunately, however, its options would have been issued in May.

The government induced rally, first quarter earnings and subsequent capital raises have given the banks the impression that they can earn their way out of this toxic asset mess. (Pragmatic Capitalist)

BofA and Citi risk losing a lot of talent. (Reuters)

Citigroup tells employees what to say about the delisting. (Dealbreaker)

Bank of America will comfortably exceed its capital goal. (Bloomberg)

The top marginal income tax rate for a Chicago futures and options trader is 23% (but Obama wants to raise it). (Felix Salmon)

Did Google, Apple and Yahoo agree not to recruit from each other? (New York Times)