Has contractor recruitment turned a corner?

After more or less a year of dwindling demand for IT contractors, it seems that financial institutions have regained an appetite to take them on again. However, the number of jobs being secured is still down 40% on this time last year.

Analysis by Powerchex, a pre-employment screening firm for financial services, says that there was a sudden surge in demand for IT contractors in June - 50% up on the previous month - after more than a year of falling employment figures.

Alexandra Kelly, managing director of Powerchex (which works with 300 financial services firms), says: "Things haven't returned to last year's levels but there are plenty of jobs out there."

Indeed, despite the recent rally, it's been a bit of a grim year for IT contractors. Compared to Q2 last year, there were 40% fewer roles offered to IT contractors in the second quarter of 2009, according to Powerchex's stats.

But recruiters are also convinced that the recent rally represents something of a change of fortune for IT contractors.

"Over the last month we've seen a number of non-business critical IT projects that were shut down last year begin to come back again and firms are taking on contractors for these," says Simon Walker, director of Project Partners. "This, coupled with the ongoing change management work, has meant a decent demand for interim staff within financial services."

Sadly, this demand has yet to result in daily rates being offered a pre-crisis levels. Walker says that banks are still offering around 15% less for the majority of IT contractor roles compared to this time last year. 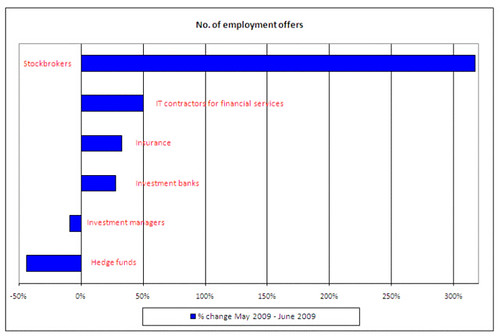