You are most likely to become a millionaire at JP Morgan

No sooner were you asking for the distribution of compensation at US banks, than an indication of their dispersal has appeared in the form of Andrew Cuomo's report on bonuses. It shows the number of people receiving bonuses over $1m, $2m and $3m at selected houses.

Despite all the fuss about last year's big bonuses, Merrill Lynch came out as one of the worst payers. Even when its retail brokerage network is eliminated, less than 1% of its staff received bonuses in excess of $1m for 2008. 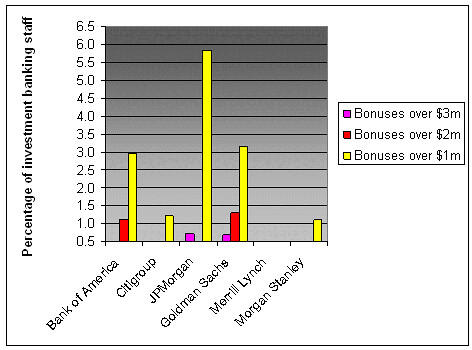