Like anything in financial services these days, the name of the game in IT is currently cost-cutting. Though technology has traditionally been a way to save money and gain a competitive edge, 2009 is the first year since consultancies started tracking IT budgets that tech spend in financial services has contracted.

Despite this, banks, fund managers, brokers and insurance firms are all big spenders when it comes to IT. In 2009 financial services firms have an estimated $353.3bn earmarked for technology spending, according to consultancy Celent.

The really big user of technology is the trading floor and everything related to it. Whether it's a question of actually buying and selling financial products electronically, processing them through smart-order routing systems, or communicating to ensure that trades go through smoothly, multi-million dollar technology projects are crucial.

This year, however, there's been a greater focus on developing or upgrading systems around risk management or compliance.

As a developer, you are at the coalface of the IT department. Although some of the job will involve developing new systems, banks often purchase software from third-party vendors. In-house developers will then tailor the software to the institution's needs or integrate it into existing systems.

Developers aim for 'low latency', which means reducing the combined amount of time it takes to execute and process a trade to the shortest possible. The speed with which a trade is placed can be crucial to its profitability and may be as little as microseconds.

Business analysts effectively act as the liaison between the IT department and the company, investigating how technology can be used to improve the bank's competitive advantage.

In the current environment, business analysts are highly in demand, says Rob Steck, who recruits for IT roles at Citigroup. "Anybody who can successfully 'face off' with the decision-makers and align the technology with business interests is currently very valuable."

Meanwhile, project managers will take the reins of the new venture once it's been given the go-ahead. Project management is a strategic role involving planning, structuring and eventual completion of the projects. You'll have to manage a team of developers, liaise with third-party vendors and be answerable to the business should plans go awry.

The people in technical support are there to solve problems when they arise on the trading floor. This might sound simple, but glitches here could cost banks millions of dollars within minutes.

What's more, traders aren't shy when it comes to reporting IT gremlins, so a thick skin is a must.

If you don't want to work for a bank, there's the option of working for third-party vendors, which specialise in providing software for a particular sector.

If you want to work for a vendor, try sending your CV to major players such as Sungard or Oracle, or apply to specialist financial services software vendors such as Fidessa, Sophis, OpenLink or Charles River. Vendors generally pay less but can be a good training ground to develop your technical skills.

IT pay doesn't exactly reach the dizzy heights of investment banking, but it's not pennies either. Generally, the more specialised your skill set, the more cash you can get.

For example, a salary survey by IT headhunter JM Group revealed that a vice president business analyst working on exotic derivatives can earn up to 90k in the UK; those working on 'vanilla' (standard) products can get 80k for the same position. 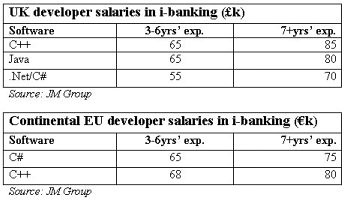 Development roles vary depending on the software. C++ developers get the most - 85k at VP level - with C#/.Net posts paying 70k and Java 80k. Project manager roles vary wildly, paying 70-120k at the top level in the UK and €90-110k in the rest of Europe.

In IT, the vast majority of successful applicants will have a computer science degree, and those who don't will come from a maths or physics background.

Simon Masters, head of recruitment at IT vendor Trayport, says: "The degree acts as an indicator of your technical ability. If you've done a degree in, say, zoology, how can you demonstrate that you have an interest, passion and aptitude for technology?"

If you want to move into a development role, experience with programming languages such as Java, C++, C# or Microsoft's .Net, is essential. However, this is not to say that you need to be a whizz kid at entry level.

Technical skills will be nurtured, but the learning curve is steep. Victor Lebreton, capital markets consultant at investment banking IT firm CSC, says: "Curiosity and an open mind, combined with a strong logical attitude, are very important because of the vast quantity of information you have to learn."

Soft skills are valuable when it comes to business analyst or project management roles.

Steck says a business analyst has to be able to explain the benefits and pitfalls behind a potential technology investment, without leaving non-IT people swimming in a sea of jargon.

Project manager roles, meanwhile, are essentially management positions for developers, and you have to be comfortable acting as a central co-coordinator for disparate groups with differing interests.

Steck says: "Project managers need to be able to juggle a lot of things, control the budget, look after central stakeholders, ensure continuity of the project and manage a team."