Large French banks appear to have a certain symmetry. Last month, SocGen said it intended to make 600-1,200 hires across its investment bank in 2010, with a focus on fixed income. Today, it transpires that BNP wants to hire lots of fixed income people too.

According to Les Echos (via Bloomberg), BNP is intending to increase its front office fixed income headcount by 10% this year, with the addition of another 200-250 people.

As we have noted previously, BNP definitely needs to hire for its London rates business, where people have been removing themselves due to allegedly long deferrals. And as we have also remarked, FICC businesses look like being 'stronger for longer.'

Yesterday, BNP produced the following attractive graphs/charts reflecting the current distribution of revenues in its corporate and investment banking business. 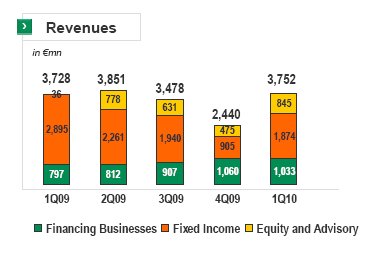 Bank of America is making a 'significant injection of capital' into Merrill Lynch in South Africa. (Bloomberg)

FSA is losing its head of risk. (FT)

Adair Turner justifies pay rise with talk of "the enormous distance" covered over the past three years. (FT)

Deutsche has a 1.5bn short position on Iberian companies. (Telegraph)

"it is just politically impossible for [Germany] to do stress tests." (Financial Times)

Rumour that Goldman is settling for $5bn. (The Daily Short Report)

Cohn: No indication that Goldman's anywhere near a settlement. (NY Times )

Nomura, Deloitte and Standard Chartered have agreed to pay a living wage. (Guardian)

"We struggle day after day to make the bank a bit of money ... to put that in peril ... I am revolted." (Financial Times)

Singapore is the Monaco of the East, minus the bikinis. (Bloomberg)