A man called Steve is stalking Moorgate. He is an IT professional who is fully au fait with the use of apostrophes. Steve is looking for a job in: project support, rollouts or desktop support. You can get in touch with him on: 07939 543 155. 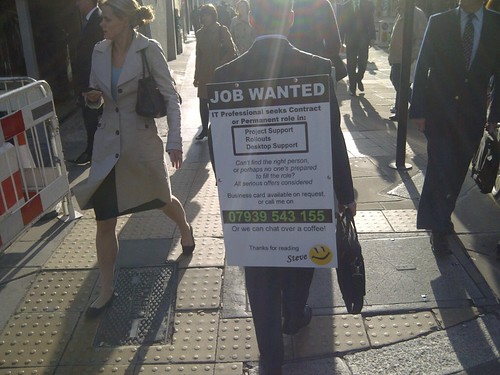 We called Steve. What brought him to this? He wasn't willing to say. "To be honest, this isn't really an angle I want to take," he told us.

Unfortunately, it may be too late for Steve to retreat to the full anonymity of online job searching. By resorting to the board, he's set himself up as a Joshua Persky in the City of London - Joshua being the MIT graduate who stalked Wall Street in 2008. Last year, Joshua remained unemployed.

Sandwich boards do, however, have a history of success. In 2009, David Rowe a history graduate walked Fleet Street offering to work for free. He was subsequently offered a job as a recruitment consultant.

Bigger boards may be better boards. If walking Moorgate doesn't do it, Steve could increase his visibility. Like Féilim Mac An Iomaire, who achieved a job he, 'could only have dreamt of,' having advertised his availability on a billboard in a busy road in Dublin.