After a strong Q1, banks' redundancies may happen later in the year 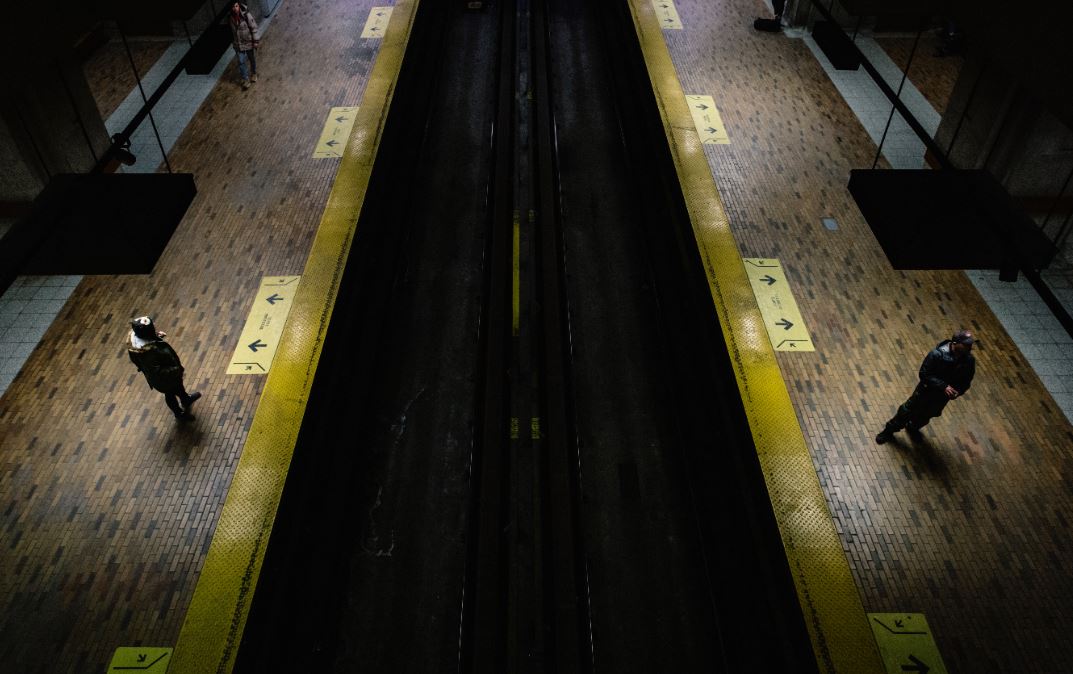 Some good news: as reported first by Financial News yesterday and then by the Financial Times today, markets divisions of investment banks seem to have had an excellent first quarter (Q1). The bad news is that it's unlikely to last.

Those extolling the wonders Q1 include market intelligence provider Coalition and George Kuznetsov, a partner at McKinsey CIB Insights (who worked for Coalition until late last year). However, while flagging the outperformance of the past three months Kuznetsov says he's far more uncertain about the next three and the three after that.

"McKinsey CIB Insights expects a significant increase in Global Markets revenues for the first quarter of 2020 (vs. Q1 2019), as a combination of the impact of COVID-19 and market dislocations which have driven unprecedent sustained volatility," says Kuznetsov. "The rest of 2020 is expected to be more challenging due to lower client activity."

The stand-out areas in sales and trading in the first quarter were those that are most commoditized: flow equity derivatives, FX, and commodities. "The question for banks now is whether to change their business models in the expectation of persistent volatility, or to simply try to fly through this crisis as best they can with the existing model," Kuznetsov says.

At the same time, however, other product areas have struggled in recent months. Spread products (credit), municipal securities and securitized products have turned in a mixed performance. Emerging markets desks have done well in Asia, less well elsewhere. Prime brokerage divisions are faced with lower deposits.

The real issue, however, lies outside of markets divisions and in broader banking operations and commercial loans. As this year goes on, Kuznetsov says we're likely to see the resurfacing of a word associated with 2008: impairments.

"Despite many parallels to 2008, the impact on global markets institutions is expected to be lower given better capitalization, increased transparency on risk positions and lower principal and warehousing risk," says Kuznetsov. "However, we do expect negative pressure on banking divisions due to increase loan impairments."

Combined with declining revenues in M&A and capital markets businesses, growing impairments are likely to prompt banks to revisit costs as the year continues. Credit Suisse is cutting people already, but the layoffs are not understood to be related to the virus: any virus-related cuts are likely to come in the second half of 2020 as the dust settles, or even in the first quarter of 2021.

In the meantime, the winners are likely to be big U.S. banks which are best equipped technologically to deal with unprecedented trading flows and which dominate the thriving product areas. - JPMorgan, Goldman and Citi are all likely to have benefited from commodities trading in the first quarter; JPMorgan, Citi, Barclays and HSBC should have done well from FX; all the big American banks along with Barclays and SocGen are strong in equity derivatives.

Will European banks pull back from the U.S.?

As the year progresses and if writedowns increase, the danger is that some European banks will take a long, hard look at their commitment to the U.S. market.

As Deutsche Bank's European banking analysts point out in a note today, the underlying return on tangible equity (RoTE) at many European banks' U.S. intermediate holding companies (IHCs) was already low and falling. As the chart below shows, this is particularly the case at BNP Paribas, HSBC and Credit Suisse. 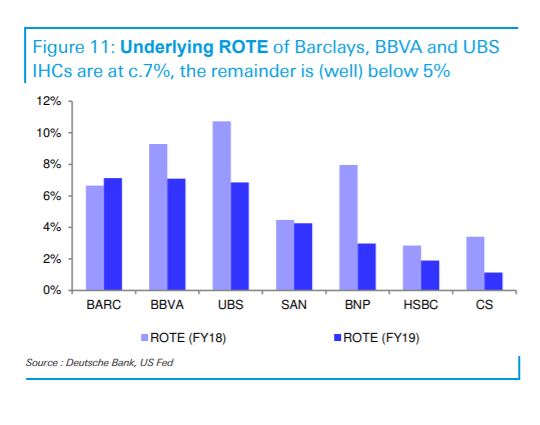 Moreover, the cost income ratio at U.S. intermediate holding companies often high. At Credit Suisse, last year it was already over 90% of income - and the Swiss bank's U.S. operation is particularly exposed to U.S. mortgage-backed securities.

As the 2020 progresses, considerations like these may come to eclipse any excitement about trading revenues in February and March. 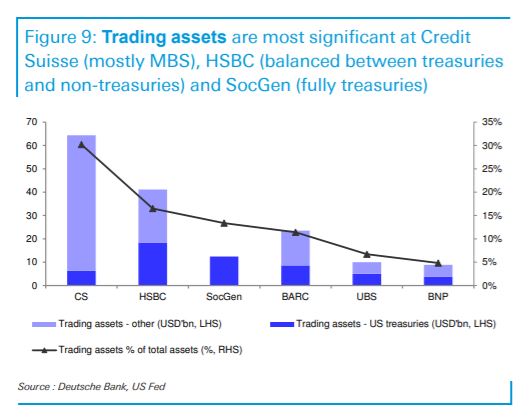 Photo by Jp Valery on Unsplash