Deutsche Bank has been showing off its new NYC office 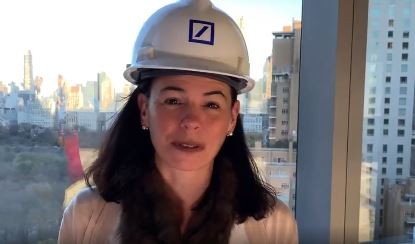 Deutsche Bank has spent the past two years preparing to move out of 60 Wall Street and into a new office at Manhattan's Columbus Circle. Despite the pandemic, and despite suggestions that half the bank's New York staff could move to low-cost locations in the next five years, that move is still going ahead.

In a New Year's video posted to her LinkedIn channel, Christiana Riley, head of Deutsche Bank's business in the Americas, takes viewers on a tour of the new Columbus Circle office (still a building site). Wearing a Deutsche-branded hard hat, she says the bank is on track to start moving-in this summer.

The new office has "phenomenal views" over Central Park, including from the trading floor, which has a "tremendous amount of light," says Riley. The new location in Manhattan will bring Deutsche much closer to what's "going on" and to clients, who she says are expected to return to NYC in 2021.

Last February, Deutsche's New York staff told us they were fearful the new office move would coincide with a program to cut New York jobs given that Columbus Circle office has 30% less floorspace. Riley seemed to confirm this in December when she told the Financial Times that as many as half of Deutsche's current New York staff could be moved to smaller U.S. hubs in low-cost areas in the next five years.

Many of the jobs moving out of New York are likely to be in technology, compliance and risk, areas which Deutsche is in the process of restructuring. The German bank just hired Sandra Frenz, a former COO for finance, risk and treasury at Barclays, as a New York-based managing director and COO responsible for transformation and risk management. Deutsche is also contemplating allowing staff to work from home two days a week indefinitely.

There was no mention of the planned changes in Riley's office tour. "2021 - it's going to be a great year, I'm optimistic," she said. "What I'm most looking forward to is all of us being here again, together."