Is 2012 really going to be worse than 2011? If you lose your job in a bank now, will you really be able to get another one, without going into asset management?

JPMorgan analyst Kian Abouhossein and the bank's fourteen person equity research team have produced a detailed report on the European banking outlook for 2012. The implications are various, but you probably shouldn't be working in fixed income for a European bank next year.

The main points are as follows:

1) If UBS successfully scales down its FICC business, it may be the safest bank to work for

JPMorgan's European analysts are pro-UBS, citing it as their, "top Global IB pick" on the grounds that it provides comfort from a funding, liquidity and sovereign perspective. Its capital position is seen as "solid" (Basel 3 common equity Tier 1 ratio of 11.7% in 2013E) and the wealth management business is performing well.

However, this is predicated on the successful scaling down of the FICC business. If the downscaling doesn't go to plan, JPMorgan's analysts are still talking about the joint venture they've already mooted with Credit Suisse's investment bank, which would cost 13,000 jobs.

A new global liquidity coverage ratio is being introduced on January 1st 2015, but they say banks will likely be obliged to adhere to it by the end of 2012 or 2013.

The LCR is designed to ensure that banks can survive a short term liquidity crisis, and more specifically a 30-day run on funding.

At the end of 2012 only 7 out of 28 banks (including Credit Suisse, UBS, HSBC and Standard Chartered) met the LCR requirements.

3) Banks need to cut pay or cut headcount, or suffer a 50% reduction in their return on equity

Without mitigating actions, the return on equity at the average global investment bank will fall 53% to an average of just 8.3%, predicts JPMorgan.

Fortunately, or unfortunately, the big drop in ROE can be avoided if banks slash headcount and pay. The details are provided in the table below, but for those who can't see it, Abouhossein's advocating the elimination of another 3,400 staff or an 18% reduction in average compensation.

Bank by bank, the reductions required would be as follows:

Credit Suisse investment bank: Elimination of 1,947 members of staff, or reduction in compensation per head from $305k to $263k.

UBS investment bank: Elimination of 1,664 members of staff, or reduction in compensation per head from $313k to $252k.

Deutsche investment banking business: Elimination of 4,228 members of staff, or reduction in compensation per head from $469k to $301k.

Goldman Sachs investment banking business: Elimination of 4,314 members of staff, or reduction in compensation per head from $458k to $378k.

Morgan Stanley investment banking business: Elimination of 3,450 members of staff, or reduction in compensation per head from $390k to $270k. 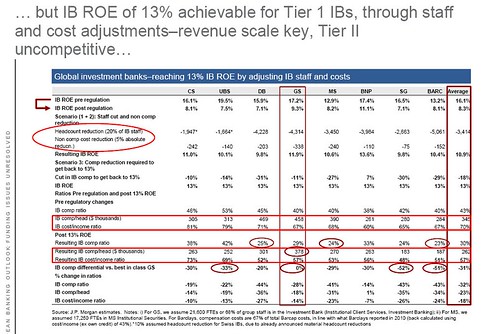 4) In a cash equity-like FICC world, you want to be working for a scale player

Investment banking isn't going to be much of a growth industry. As shown in the graph below, JPMorgan's analysts don't think revenues are going to expand much in 2012 or 2013. Fixed income currency and commodities (FICC) revenues are expected to shrink further. 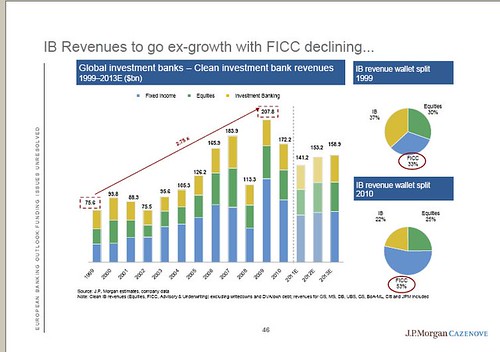 In these circumstances, you want to be working for a scale player. In fixed income, this means: JPMorgan, Goldman Sachs, Deutsche, BarCap, Citi or Bank of America. Alternatively, JPMorgan advocates the 'FICC-light' model at BNP.

5) Maybe you want to be working for a US bank

European banks also need to refinance €395bm of debt next year and €389bn the year after that, which will prove problematic if credit markets remain closed.

6) Some non-scale players are going to struggle

UBS, Credit Suisse and Morgan Stanley are identified as the specific Tier II investment bank relative 'losers' who will suffer particularly from falling revenues and inflexible compensation. If you survive the next year at UBS, you may therefore be well placed, but whether you will survive is open to question.

French banks aren't scale players, but they are seen as better placed to face the future because they've managed to rein compensation back to a significantly lower proportion of revenues. This is illustrated in the helpful chart below. 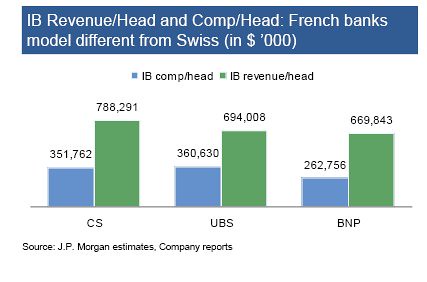 Conclusions for 2012: Avoid tier 2 players unless they're French; stick with large US banks, unless it's Morgan Stanley; avoid UBS, unless you're in equities or IBD.