Advancing Standard Chartered’s diversity and inclusion agenda. Here’s how I got my seat at the table 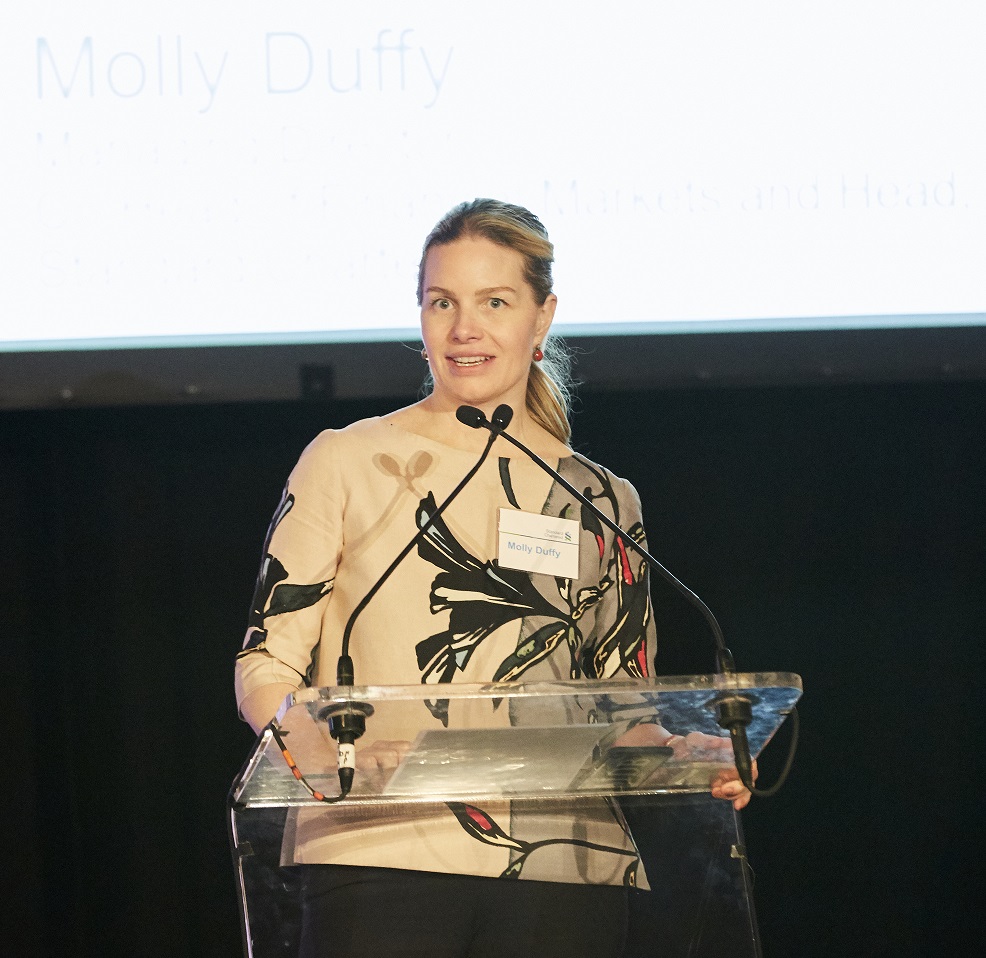 It’s no secret within the finance industry that as career level rises, female representation declines.

Almost half of all financial services employees are women, but at the executive level, it’s only 15 percent, according to a World Economic Forum Global Gender Gap Report. Female talent remains significantly underutilised.

Standard Chartered is seeking to close the gap. The Bank believes that gender should not be a barrier to progress and has set out a tangible target to fill at least 30 percent of senior roles with women by December 2020 – double the industry average.

Molly Duffy Burns joined the Bank in 2017 as co-head of Financial Markets and head of FM Sales for the Americas. She brought with her over twenty years of experience in macro financial products. Standard Chartered Americas’ Financial Markets business, she says, has been focused historically on foreign exchange. During her tenure, however, she has played a key role in helping the Bank diversify its product offering to clients to include more Credit, Rates and Capital Markets. Duffy is currently the Head of Financial Markets for the Americas and the Global Co-Head of Investors.

Duffy recognizes that there must be various initiatives to support gender diversity and advocates for an inclusive hiring process. This is done in a number of ways, including efforts to ensure a diverse pool of internal and external candidates.

She is right to focus on the candidate pool. Statistically speaking, if there is a gender underrepresentation  in a pool of candidates that have been shortlisted for a role, there is little chance of them being selected by the hiring manager. If there are at least two women in the pool, one is  79.14 times more likely to be hired, according to a study by Harvard Business Review. This figure is also affected if no females conduct the interviews.

Further down the life cycle of an employee, the Bank continues to address challenges surrounding gender inequality  through paid maternity leave (an impressive five months) a flexible work arrangements policy, and employee support groups to help parents return to the workforce.

In the Americas, Standard Chartered employs over 65 nationalities and more than 60 languages are spoken, all the more inclusive considering its total number of employees is about 1,300.

These efforts have not gone unnoticed. The Bank earned a 100 percent rating and the designation of being a “Best Place to Work for LGBTQ Equality” on the Corporate Equality Index 2019, by the Human Rights Campaign Foundation.

The Financial Times, on their global annual lists, has thus far recognised nine Standard Chartered employees. On the HERoes (rankings of female and male executives who have made a substantial difference to women’s careers) six employees were recognised as Top Female Champions, Top Male Champions and Top 50 Leaders. On the Top Future Leaders OUTstanding LGBT Executive List, three employees were ranked.

Beyond internal Diversity and Inclusion initiatives, the Bank also supports various external programs. Because female entrepreneurs in the US own over a third of businesses but receive just two per cent of all venture funding, Standard Chartered Americas’ Women in Tech Incubator (in partnership with the Zahn Innovation Center at the City College of New York) offers mentorship, training and seed funding to help more women kick start their businesses. “Quite a few of us are involved with this.” says Duffy.

Having the opportunity to put in practice how we support and champion greater gender diversity through different programs is a motivator for Duffy and her colleagues. “I feel very grateful for my role here at Standard Chartered. I am motivated by the challenges, and there is room to make a difference and impact. I've got a fantastic and smart group of people to work with. I love to come to work every day.” she says.

On the kind of people who would thrive alongside her team, she prioritises those who are “intellectually curious”.

Duffy seeks to hire someone who “likes to learn, wants to challenge themselves, is curious about the world and wants to understand emerging markets and where the growth opportunities lie. You need to be interested in finance in Asia, Africa and the Middle East, as well as the Americas. We're a very diverse Bank spread across the world so that's a key element to me.”

“The women here embrace training and coaching opportunities to get to the next point of their career,” says Duffy. “I am a firm believer that by focusing on career development and goals, we can help the female population in financial markets grow and continually advance. It’s been helpful in my career.”

On her Standard Chartered business card, Duffy points to three words important to the Bank’s mission: ‘Here for good’. One way that the Bank embodies this mission is how it has made its diversity and inclusion practises a fixture of their banking operations and societal impact.

Talking with Duffy, you get the sense the Bank is just getting started — a notion also derived from a recent Standard Chartered advertising campaign that addressed gender inequality in the board room, stating it’s ‘not good enough.’ ‘Good enough will never change the world’, says the ad, ‘because we are not here for good enough.’

Duffy agrees. “I feel very lucky to live in this time when there's such a focus on addressing unconscious bias and ensuring capable women have a seat at the table.” On this, may we ensure this seat is Here for good.